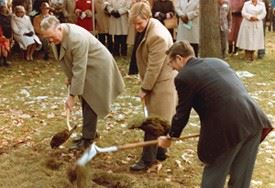 Within a very short time, it became obvious that the need for such housing far exceeded the supply. After extensive study, an addition to the original facility was opened in 1984. This project was funded by a grant from the Gerstacker Foundation, the Herbert H. and Grace A. Dow Foundation, and the Midland, Hearst, Allen, Barstow and Dow Corning foundations. In addition, widespread community support from The Dow Chemical Company, the Midland Housing Commission, local businesses and churches, as well as the general citizenry, made this effort - coordinated by the Midland Foundation - a resounding success (see photo at right of groundbreaking ceremony in 1984, with, from left, former Midland Mayor Joe Mann and former U.S. Congressman Bill Schuette, plus former Housing Commission President Art Chomistek, at right).

When Washington Woods East opened, it became the only facility of its kind in the Midland area providing support services such as a meal plan and health monitoring to a broad income range of senior citizens.

Once again, demand exceeded supply, and in 1990-91, a repeat fundraising effort, coordinated by the Midland Foundation, brought together the same winning combination of funding sources to create Riverside Place, a 150-unit facility on Midland’s Main Street.

With the completion of the third phase of senior housing, the City of Midland operates two facilities with a total of 364 units dedicated to providing seniors with safe, comfortable, affordable housing in a personalized environment. Because our facilities are debt-free and non-profit, we are able to be totally self-supporting with no government subsidies.

Our goal at both Washington Woods and Riverside Place is to keep our residents independent and in their own apartments for as long as possible.