View Midland's NMT Plan (PDF), a long-range plan that will guide efforts to build upon the city's current non-motorized transportation offerings. The plan, adopted by Midland City Council in September 2013, is based on the first plan approved in 2009, and reflects experience gained since that plan's implementation. 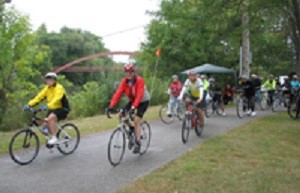 The new document covers the next five years, starting in late 2014.

October 23, 2012: Once again, Midland has been named a Bicycle Friendly Community for going above and beyond to develop more non-motorized transportation methods (bike / walking paths and connectors between existing pathways) throughout Midland.

In April 2010, Midland received this same national recognition. The League of American Bicyclists awarded Midland for being a "bike-friendly community," one of just 35 communities from around the U.S to receive this special designation.

During spring 2010, the City of Midland received a $2,000 grant from the Michigan Baseball Foundation and a $1,000 grant from Tri-City Cyclists to work on a bike loop in the downtown area; this was completed by the end of summer 2010.

Midland City Council also has budgeted $25,000 in the 2010-2011 fiscal year to post signage downtown and lay down pavement markings on Ashman and Rodd streets between Nelson and Main streets.

The City has also received $15,000 from the Midland Area Community Foundation for pavement markings and signage related to the new bike paths.

2010 enhancement plans are part of a larger effort to mark many of Midland's major streets so bicyclists know the safest portions of the roadway on which to ride. It is the City's goal to complete the majority of the projects outlined in Midland’s Non-Motorized Transportation Plan (see documents to the right) between 2015-2020.