Whether you are a visitor to Midland or a resident, you may have noticed some differences in the City’s traffic signal operations. Most traffic lights are brighter and easier to view than before, even when the sun is shining on them. That's because the City of Midland has installed Light Emitting Diode (LED) traffic lights in place of pre-existing incandescent lights.

Compared to incandescent traffic lights, LEDs have greater light intensity and are designed to absorb, not reflect, most sunlight that enters the lenses. Also, LED lights are more visible, last much longer, and use much less energy. 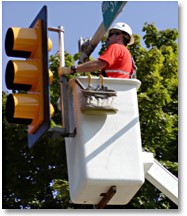 Various forms of LEDs have been in use in the U.S for many years. Most of the tiny red and green indicator lights you notice on your appliances, radios, and other digital visual effects are LEDs. However, in the last decade, their use has expanded to many other areas, including use in automotive tail lights and turns signals, as well as traffic signals.

Research - Timing is Everything

For several years, the City of Midland monitored the development of LEDs as an alternative means for street signal operation. Since LEDs require much less energy to operate, they cost less to operate.

The City reviews signal operations annually and determines necessary upgrades to Midland's signal system. During one of these reviews, it was determined that many of the City traffic signal components were scheduled for upgrade or replacement. To save on installation costs, LED traffic light implementation was considered as part of the traffic signal upgrade or replacement program.

The City of Midland also consulted with several Michigan municipalities that use LED traffic lights and determined that these lights have become very reliable considering the various climate changes in the state.

When determining costs of LED implementation, the City of Midland utilized Michigan Department of Transportation (MDOT) research regarding acceptable LED traffic light products in Michigan. Acceptable products must meet State standards regarding light intensity and reliability, among other things.