On Friday, November 6, the roadway was completely reopened to vehicle traffic. The new expansion includes a dedicated right turn lane on southbound Eastman at Airport Road as well as an additional southbound straight lane on the north side of Airport. (See the map below.) Images in the slideshow above show the newly-expanded roadway. 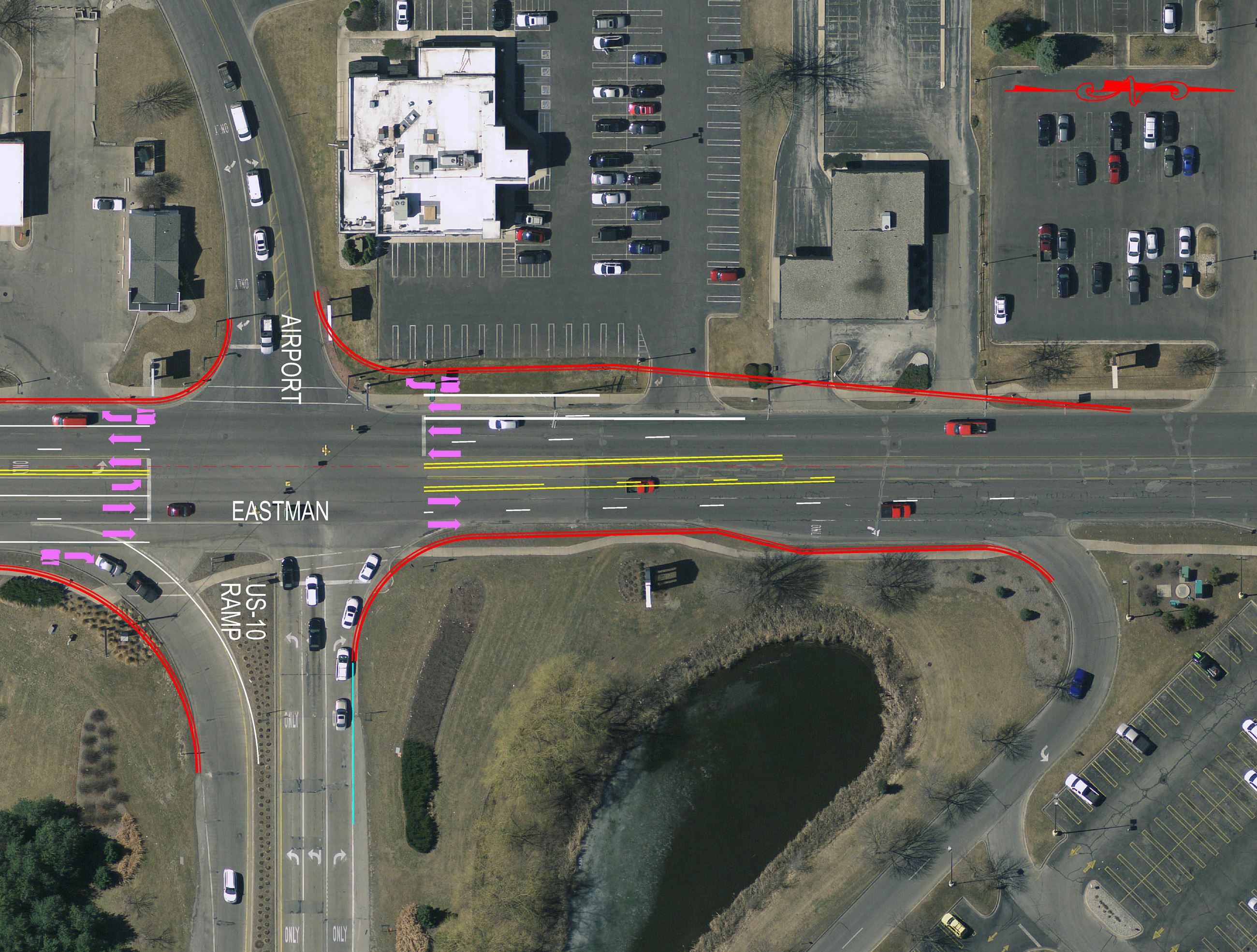 Eastman Avenue traffic congestion has been a community concern for several years. In 2005, the City commissioned traffic consulting firm DLZ to perform a study of traffic conditions along the Eastman Avenue corridor between Wackerly Street and Joe Mann Boulevard and derive potential solutions. Three alternatives were developed at the time, each in excess of 10 million dollars. Due to the anticipated high cost of the solution, consultants were challenged to identify lower-cost alternatives to address traffic. As a result, additional alternatives were developed in 2006 that included acquiring additional right-of-way and expanding Eastman Avenue to include a dedicated right turn lane on southbound Eastman at Airport Road as well as an additional southbound straight lane on the north side of Airport. (See the image above.) Eastman was also to be resurfaced from Wackerly Street to Joe Man Boulevard. Design plans were then developed for the selected preferred interim alternative, but in 2008 the project was put on hold due to poor economic conditions.

In 2017, DLZ was contracted to re-evaluate and update the Eastman Avenue alternatives study from 2006 using updated traffic volumes. The new study indicated that traffic volumes had not increased at the rate projected during the 2006 study and, as a result, the alternative solution provided in the initial study would still work in today’s environment.

Funding for the Eastman Avenue project from Airport Road to Joe Mann Boulevard was included in the City’s 2016-17 budget. Rowe Professional Services Company (Rowe) was hired in 2018 to develop construction plans and specifications for bidding purposes. In May 2019, construction bids were received and reviewed by the City; however, it was determined that funding for the project was insufficient based on bids received and the project was put on hold again.

Modifications were made to the project bid in an effort to improve its cost effectiveness and it was bid for a second time in January 2020. Although an improvement from the first bid cycle, the results of the 2020 bid opening remain that project funding is currently insufficient for construction: Funding currently allocated to Eastman Avenue is $1,100,000, but additional anticipated expenditures for engineering, inspection and construction will require an additional $450,000 is needed to complete the project.

After several necessary actions by the Midland City Council, a resolution was passed on March 16, 2020 that amended  the 2019-2020 Major Street Fund to allocate the $450,000 needed to complete the project. At this time, construction is estimated to begin in Spring 2020.

For a detailed timeline on how this funding was allocated, see below.

At the January 27, 2020 City Council meeting, Council voted to set a public hearing to consider amending the 2019-20 Major Street Fund to allocate the additional $450,000 needed to begin the expansion project. As a result, a public hearing was set for Monday, February 10 to consider committing the additional funding needed to start this project; however, as a result of a technical error, the item was removed from the City Council meeting agenda for that night and reset for Monday, February 24, 2020.

Click the link below to watch the video to view City Engineer Josh Fredrickson’s presentation about the project.
Watch the January 27, 2020 meeting (38:00 mark)

Watch the February 24, 2020 meeting
(The item is not discussed during the meeting, but the agenda can be read and reviewed.)

At the March 16, 2020 meeting of the Midland City Council, a public hearing was held to consider amending the 2019-20 Major Street Fund to allocate the additional $450,000 needed to begin the expansion project.Following the public hearing, City Council voted unanimously (5-0) to amend the Major Street Fund and allocate the additional funds to begin the Eastman Avenue expansion.

Bids for construction of this project were collected in December 2019 and January 2020 and the project was awarded to Crawford Construction of Mount Pleasant, approved by City Council on March 16, 2020. Construction is estimated to begin in summer 2020.